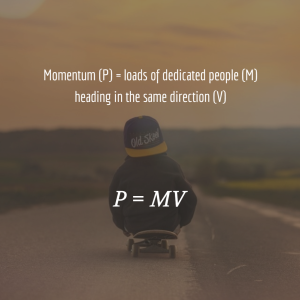 One of the things my son and I do for weekend kicks is launching ourselves down our street, which has a reasonably steep hill, on skateboards. There’s something about gaining momentum that is fun and exhilarating. And as the formula P = MV rightly points out, the bigger you are the faster you go.

As a social entrepreneur I also love momentum. I love growth. I’m not scared of BIG, and I not so secretly desire to use the organisations I am involved in, to have a global impact. I want them to take over the world and do good.

I also want the organisations you are involved in to succeed. And grow. And gain momentum. That’s where the formula comes in.

Mass equals people. Without people there is no momentum.

It would be easy to think, that the more people you have the more momentum you have, but that’s only partly true. Mass is about density. And density when it comes to organisations is about quality.

100,000 likes might increase awareness, but it won’t bring long-term momentum on its own. What organisations need are dedicated, high quality people, who do great work and bring mass.

Mass is about getting as many great, activated people as possible.

Velocity is different from speed. Speed is how fast something is moving, whereas velocity how fast it moves in a direction. Velocity is heading somewhere.

If you have 100 people moving incredibly quickly in different directions, then they are pulling against each other. You have speed, but not velocity.

In an organisation, everyone needs to be moving fast AND in the same direction.

Without velocity you have no momentum.

Now consider the organisations you are involved in. Do they have momentum?

Are you doing your best to bring Mass (dedicated involvement) & Velocity (heading in the same direction)?

We can all be apart of something big that has incredible momentum.

We just cant do it without climbing on board, and then launching ourselves down the hill.

One thought on “How to build momentum”