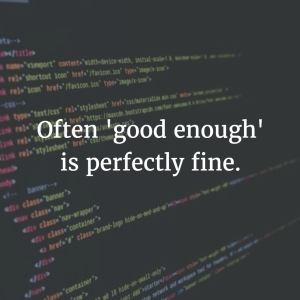 One of the first computer games I ever developed in my teens was a very simplistic helicopter game, where you would hunt out submarines and bomb them. It was simplistic for two reasons, the first of which I was learning to code, and the second because all games were clunky back then, which is what you would expect from home computers that you plugged into your TV screen.

As a young guy I was good at coding, and this knowledge allowed me to learn new skills coding in Visual Basic as I got a real job. However when I compare myself to our IT team I’m a good amateur at best.

I have in the past really enjoyed coding (I like creating new things), and right up to last year I’ve dreamed of teaching myself the latest technologies.

Then I realised, in a moment of brilliance, that it’s a ridiculous idea. To be the leader I need to be, I don’t need to be a better coder.

Good enough is perfect for me.

And realising I’m good enough at something, is incredibly liberating.

Obviously I’m not saying you shouldn’t get better at things. I never want to stop being a better leader of leaders.

Choosing what will really make you the person you want to be is essential for letting go of what’s not.

Getting to a point where you can say ‘I’m good enough at this’, not only allows others to be better than you, but frees you from some dream which may be more of a subconscious burden than you realise.

What are somethings you’ve always wanted to be better at?