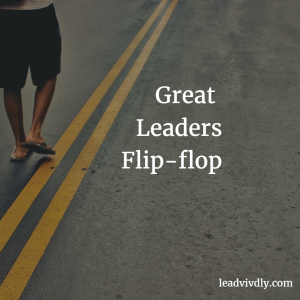 It’s election year. This means you will hear two phrases in the media over the next 6 months. They are the terms “flip-flop” and “U-turn”.

The media is exceptionally good at spotting a flip flop or U-turn in the opinion of a candidate. While keeping the politicians ‘honest’ is important, I get concerned when the media portray changing your mind as a bad thing!

Authentically changing your mind is a strength.

Which type of leader would you rather follow?
– A person who is close minded to change.
– Or a man or a woman who authentically considers the evidence, and changes their mind.

For some reason society often frowns upon those who change their minds.

Personally, I’d rather be seen as a flip-flop leader.

Are you prepared to change your mind?

More importantly if you are presented with new evidence or feedback on a belief you hold dearly, would you change your mind?

Changing your mind or beliefs or attitudes is actually far harder than it seems. Far easier to stick with the status quo.

Which is why, great leaders flip-flop!