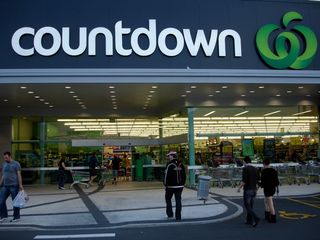 One of the problems with being intellectually inquisitive, is one can tend to over think or even over discuss things that have absolutely no impact on ones life.

So I started trying to work out what they were doing with their brand. Getting rid of multiple brand names seemed to be a great idea, but to two different colour sets? Strange. I discussed it with a number of people and came up a whole myriad of explanations. We wondered if they were trying to make some stores appear more budget, and others more classy, while bringing value back to the core brand. We wondered if they would have different pricing points.

We over wondered and over talked given that it is not our brand (although it was mainly travel time).

A lot of thought about something that has no effect on me.

But then that is the point of inquisitive. By thinking and discussing and even waxing lyrical, one refines thinking for real life situations in the future.

[203 | 365 Took this photo while getting milk. Originally titled it 'Intellectual Curiosity' but then changed curiosity to 'inquisitive' because that is a family value and my girls occasionally read my blog.]