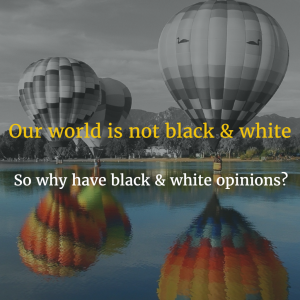 As a kid growing up we had a black and white TV in my parents room, and a colour TV in the lounge. As you can imagine the difference when switching between the two was stunning.

Equally as stunning is the difference in us when we are being black and white, compared to when we are colourful.

Black and white people say I’m either terrible at something or brilliant. Colourful is the middle possibility, I’m just fine.

Black and white people get locked in to one political view or vote based on what they want. Colourful seeks out what’s best for everyone.

Black and white leaders do what they’ve always done and believe they have the answers. Colourful leaders challenge others to push boundaries.

Colourful isn’t about abandoning everything you believe, rather it is about allowing it to be challenged.

Make it your goal this week to become more colourful.