While down south Karina & I visited the Royal Albatross Centre.

I was blown away by two things.

1) The distance and speed these birds fly. One Bird calked Toroa (with GPS tracking) flew from Dunedin to South America. Top speed 109 km per hour, and did 1020km in one day.

2) The rubbish that is in our oceans. Picture one is taken of a dead Albatross chick that was found, and the rubbish in its gut. Picture 2 is the rubbish arranged in a mural. (click to enlarge images) 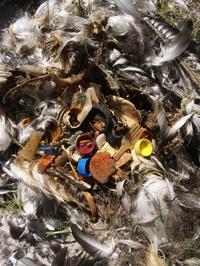 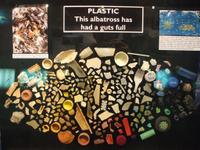 Thanks to Kate at the Royal Albatross Centre for the picture of the Albatross Chick.