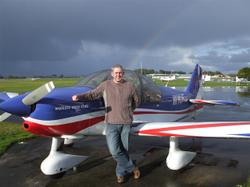 What’s that distant scream I hear?

WARNING this post is full of Acronyms. It’s a pilot thing, definitions are below.

After almost 3 years in the making, yesterday I passed my flight exam for my PPL.

It was a weird day. Initially I was mean to fly to NPL, so I got up early and did my flight planning. As the sun came up, NZNP tower woke up and issued a METAR and TAF and it became self evident that for the second attempt in a row I was going no where.

At 08:00 I called the Aero Club and told them I was clearly not going down and they told me to get out to the club as Wayne (the Flight Examiner) was coming up IFR.  The weather was still crap, but we would aim for a break.

Around 11:00 Wayne arrived and I did the ground school component, questions about the WX, NOTAM, SPARs etc. Then I was asked to calculate TO and LDG distance, blah blah.

Now for the hard part, out to the Flight Exam in WCD.

I pre-flight WCD, do the briefs and checks, go to start the plane and NOTHING. A flat battery! I arrange for an external power pack and get the plane started, get taxi clearance and taxi to the other end of the airport to do engine run-up checks. The oil pressure was showing NOTHING.  The aircraft at this point is OS, so I taxi back to the club. On the way back, the gauge comes to life but it is too late. (For interest oil pressure dropping is one of the things you would do a forced landing for, so not a plane you should take flying)

Now for the hard part, out to the Flight Exam in WKF, but this time the nerves are at an all time high!

Once we got back on the ground I honestly thought I had failed.

It was clearly one of the worst flying days I have had. My selection of paddocks in the FLWOP was not good and I came in high (the lack of wind got me). My steep turns were not that sharp and my wing drop was decidedly average.

Over all though I was very competent at most things, and competent in the above.

3 years, 77 flying hours, 96 flights, well over 100 TO & LDG. Self studying the theory, easily 300 hours ground work, and countless hours going through checks while driving my car, sitting at my desk.

I need to do some more FLWOP practice and it takes 4 – 5 weeks before I get the actual licence, and I need to pass a fit & proper person test (which fortunately has nothing to do with fitness) but the hard work is done.

Thanks to all my instructors at the Waikato Aero Club – Roger, Paul, Greg, Dave, Ash, Marie, Lorreen!